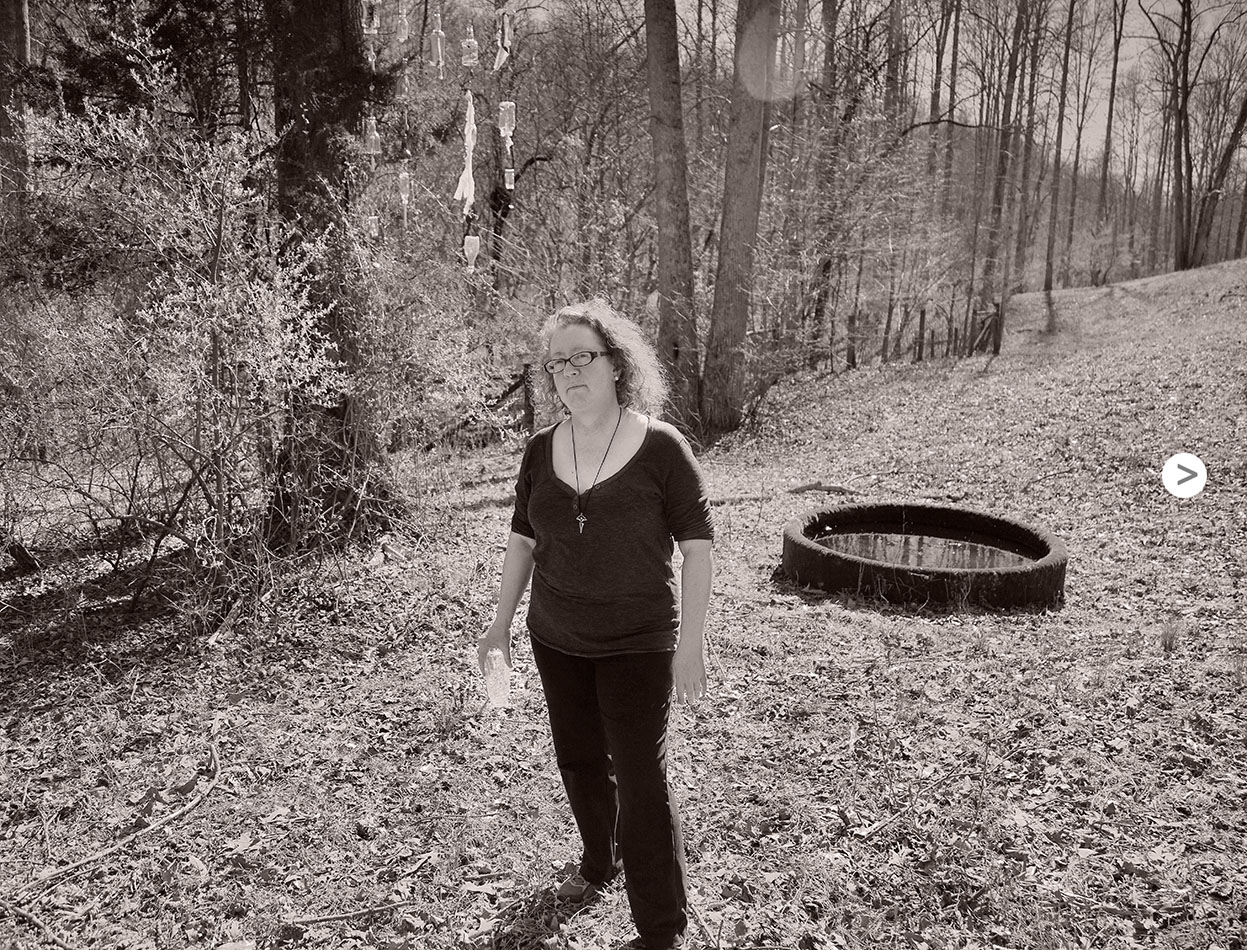 I was in graduate school at UVa.  When I met someone who lived in a nearby intentional community in rural Nelson County.  I had never heard of intentional communities before, and they come in many flavors, but this one is a land trust — acreage shared by about 70 adult members and their children.  I fell in love with the person I met, and also with the land, which is graced with woods, meadows and streams.  I admired the cooperative goals of the community — and I wanted to be a part of it.

2.)   How is the threat of the pipeline affecting you, your family & life?

Since I learned that the developers of a completely unnecessary fracked gas pipeline could condemn peoples’ property for private shareholder gain, rather than obvious public need, I have been doing what I can, with neighbors in all the affected counties, to stop the pipeline.  The proposed ACP would have a terrible impact on National Forest lands that I and my family use and treasure.  We hike, camp, birdwatch, and otherwise enjoy some of the last remaining unbroken tracts of forest in the east.  These are public lands.  It is a crime that so many trees could be cut and fragile ecosystems ruined for private corporate gain.

Methane (natural gas), which leaks from all such pipelines, is 25% more potent than carbon dioxide, so pipelines like this one pose a substantial threat to the global climate – and so threaten the future of my children and future generations.  The pipeline, if built, would involve blasting, ridge-top removal, and a huge clear‑cut in the view‑shed of the iconic Appalachian Trail.  I have had my well tested to have baseline readings, because our waterways and groundwater could be affected by horizontal drilling, chemical leakage, erosion, and silting.  Dominion has (to borrow from Judith Viorst) a “terrible, horrible, no good, very bad” track record for environmental violations; the fines they occasionally have to pay when caught are, to them, just a part of doing business.

It saddens me that our regulatory system protects corporations, is designed to allow them to ravage, pollute and despoil up to certain “legal” limits, (as in “it’s OK to ruin these 5 rivers as long as you pay some money for a water restoration project in some other place.”)  Our system of legal precedents does not favor citizens who organize to say no to corporate rape of our common resources of land, water, and air.  It tells landowners they do not have the right to quiet enjoyment of their property if a corporation with deep pockets can hire lawyers to make presentations before the Federal Energy Regulatory Commission (FERC), an un-elected panel of industry insiders.  It is incredibly stressful to realize how badly the system is stacked against common sense, against democratic principles of self‑determination, against the health and safety of communities, against our waterways, woods and fields.  And how it is stacked even worse for communities of color, indigenous, and rural communities.

3) What will you /do you do about stopping the pipeline & the politicians who have promoted it!

One of the things I have been doing is creating protest art in the form of land art: works of  assemblage placed outdoors on directly-threatened properties.  I work with landowners to create something meaningful to them and I include a poem in each piece. Then I register the copyright with the US Copyright Office.  This tactic helps us spread the word about the potential devastation; I work with local no-pipeline groups like Wild Virginia and Friends of Nelson to host tours of the works, I give public poetry readings, and give talks and workshops to help landowners replicate this tactic.  I recently attended a social justice poetry festival called” Split This Rock: Poems of Provocation and Witness,” and in a special issue for the festival, Origins Journal published sections of my #NoACP poem “Into the Tangle,” from art installed in Bath County.  I will keep on doing what I can: helping spread the word about the wholly negative impacts of the proposed pipeline; trying to communicate what it is to have a deep connection with the land — a lived connection that persists in rural communities and should be valued over corporate profit and profiteering.